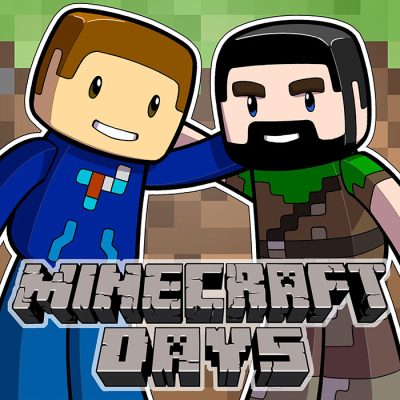 It’s not new (done back in 2013, appar­ent­ly!), but I was recent­ly look­ing through some old files on my com­put­er that I had­n’t exam­ined in awhile, and it occurred to me that some out there might find this interesting.

This came about because my old­est nephew (Michael) reached out, told me he and his best bud were want­i­ng to do a pod­cast togeth­er about Minecraft, and he asked if I could do some cov­er art to rep­re­sent it. My nieces and nephews rarely ask any­thing of me; what kind of an uncle would I be if I said, “no”?

Michael sent me images of their in-game avatars (his is on the left). I know very lit­tle about games, but I thought it would be a fun chal­lenge, and some­thing dif­fer­ent to do. So I did some research into dif­fer­ent approach­es to art done for Minecraft, and fig­ured out a direc­tion to go with it that I thought would be fun. This was the result.

What hap­pened with the pod­cast? I hon­est­ly don’t know. But that’s not the point. The point is that I got to be the cool uncle!