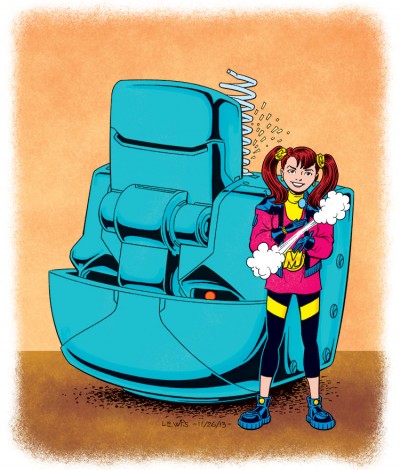 It’s occurred to me that it’s been awhile since I talked about any new comics I’ve read that I liked, and there’ve been more than a few recent­ly. So I thought this would be a good time to do that again.

This time out, I’m going to talk about Jamal Igle’s Mol­ly Dan­ger. Jamal is an artist and writer who has done a lot of work for DC, Mar­vel and oth­er pub­lish­ers. Mol­ly is the result of his decid­ing to throw his hat into the cre­ator-owned ring. I applaud when cre­ators do this. Not only is this good for the cre­ators, but we fans and read­ers win too!

Mol­ly Dan­ger is a ten-year-old girl, who just hap­pens to also have super-strength and invul­ner­a­bil­i­ty. She’s the res­i­dent super­hero of Coop­ersville, NY, pro­tect­ing res­i­dents from the men­ace of the “Super­me­chs” that crop up from time to time. Mol­ly even has a whole sup­port team work­ing with her, called D.A.R.T. (the Dan­ger Action Response Team).

This vol­ume is the first of a pro­ject­ed four vol­ume series. The book’s for­mat is larg­er than a stan­dard com­ic and in hard­cov­er, kind of like some of the Euro­pean albums I’ve seen. It’s a fun, all-ages ride that Igle has craft­ed here. And “craft” is the right word, as every aspect of this is lov­ing­ly and appeal­ing­ly crafted.

I get some of the same sense of fun from this that I used to get from read­ing my favorite Mar­vel or DC Comics when I was a kid. Not to imply that this book is done in some kind of “retro” style, because it’s not. Igle and his crew are using all the mod­ern tools at their dis­pos­al. There are ele­ments in the writ­ing that you prob­a­bly would not have seen in an old com­ic, but they make the char­ac­ters more relat­able to both young and old­er mod­ern read­ers alike. If any­thing, I’d say that what Igle’s got going here is per­haps some­thing of a sign­post for how peo­ple could approach doing mod­ern all-ages super­hero comics.

Style­wise, I’d put Jamal in the camp of the “com­ic book real­ists.” I sus­pect per­haps artists like Kevin Maguire might have been an influ­ence on him. But for my draw­ing here, I elect­ed to go my own way with it. I was kind of curi­ous to see what Mol­ly might look like with the old school col­or palette.

If you’re still a fan of good all-ages comics like I am, you might want to give Mol­ly a look!