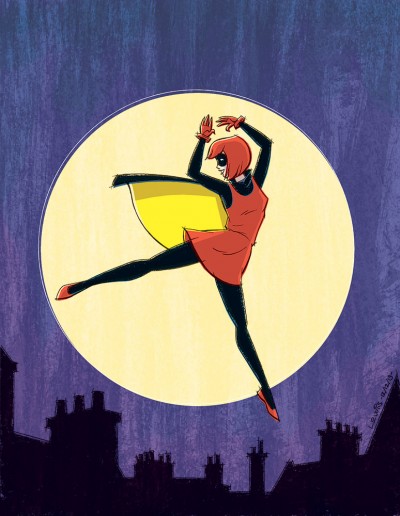 I’m con­tin­u­ing with the theme from last time, talk­ing about good comics I’ve read recent­ly. The rea­son this post’s title is in French will become clear in a bit.

This time out, it’s Paul Tobin and Colleen Coover’s Ban­dette. From the moment I first saw art from this com­ic, I knew it would be right up my alley. But it’s only recent­ly that I was able to buy a copy. This is because up until now, Ban­dette did­n’t exist in phys­i­cal form. It was part of the Mon­key­brain line of dig­i­tal comics.

Here’s where I might sound like a bit of an old fogey, but I haven’t quite been able to cross over yet to pur­chas­ing comics that exist sole­ly in dig­i­tal form. I’m not anti-dig­i­tal media by any means! I love check­ing out my favorite web comics, and I love the fact that if I devel­oped a sud­den ran­dom crav­ing to buy mari­achi music at 2 am, I could pur­chase it instant­ly on iTunes. But even so, I can’t quite get past feel­ing a lit­tle odd over the fact there’s noth­ing phys­i­cal to show for those pur­chas­es. Feels a bit like buy­ing air, even though I know it’s not the case.

Any­how, in this case, I knew that as soon as Ban­dette became avail­able in phys­i­cal form, I’d want to pick up a copy. And I was not dis­ap­point­ed! Ban­dette Vol­ume One: Presto! is an absolute blast.

Her adven­tures take place in Paris (hence my post title). You might think from the visu­al that Ban­dette would be a super­heroine, but no! Actu­al­ly, she’s a thief! Albeit an incred­i­bly gift­ed one, (with “Presto!”, as she’d say) who occa­sion­al­ly comes to the aid of Police Inspec­tor Belgique.

Ban­dette is adorable, irre­press­ible, with je ne sais quoi and joie de vivre (and per­haps oth­er French phras­es that go beyond the extent of my lim­it­ed recall of my high school and col­lege French). You can’t help but like her! Some of it is due to the writ­ing (Paul Tobin dis­plays a tal­ent for giv­ing the dia­logue a French-feel­ing rhythm with­out resort­ing to pho­net­ic accents). A lot of it also comes from Colleen Coover’s art, which imbues Ban­dette with so much life and appeal, and spontaneity.

I’d think most read­ers junior high age and up (or old­er read­ers who are still some­what young at heart) will love this book. My only regret is that there isn’t a Vol­ume 2 ready to read right now! I’d def­i­nite­ly rec­om­mend check­ing Ban­dette out, if you get the chance.

Before I close, it seems appro­pri­ate (giv­en my tim­ing, and the top­ic) to wish all my site vis­i­tors a joyeux noel et bonne année!

Ban­dette is ™ and © Paul Tobin and Colleen Coover.